While the Students' Union was meeting with the University administration on Friday, July 27, a post appeared on their blog that attempted to dispel commonly held myths surrounding the proposed Lister changes. It is clear from the administration's response to public reaction that they are not actively listening to the concerns, but are instead convinced that the outcry is due to mass confusion. The problem is not that the community doesn't understand the proposal; the problem is that they were never given the opportunity to respond. The SU is responding to the University's post with its own set of Facts that clarify the impacts of the administration's actions.

The myths below are taken directly from Colloquy, with Students' Union responses written below.

Myth #1: There will be no second-, third- and fourth-year students in Lister.
Fact: There will be upper year students now, though it is important to note that the original proposal received by the Students' Union and the Lister Hall Students' Association did not include Orientation Volunteers or LHSA staff. In discussions with the administration, it became clear that they had not considered the impact of this proposal on either of these groups.

In addition to this, the Students' Union is concerned that the administration has approached the Graduate Students' Association to begin recruitment from the non-undergraduate student population. Placing one or two graduate students as student-staff leaders on a floor of undergraduates is unlikely to create an engaged, balanced living environment.

Myth #2: There will be no more elected floor coordinators.
Fact: This proposal, if implemented in its current form, would severely undermine the LHSA's ability to fill FC positions for the upcoming year. Beyond this point, the role that the elected FC plays on the floor will be impeded, as the unelected RA will be used to fulfill tasks that are currently the responsibility of the FC. The lack of a democratic selection process for the RA will remove the automatic credibility enjoyed by elected residence life staff, and an unbalanced power dynamic between two Residence Services staff and one LHSA representative on a floor is very likely to develop.

Myth #3: The Lister Hall Residents' Association has been eliminated.
Fact: While the LHSA has not been eliminated as a student group—this is beyond Residence Services' power—these changes severely impact its ability to recruit and transition staff. Further, the actions of the University administration put into question their commitment to properly work with the LHSA and the Students' Union on matters that impact students, as mentioned in the 2009 Memorandum of Agreement signed between the LHSA and Residence Services.

Myth #4: Lister is going dry.
Fact: Alcohol consumption is being relegated to the small, private dormitories of Lister residents. Since Lister's inception in the 1960s, alcohol consumption has been permitted in the floor lounges, which are viewed as living rooms. The SU and LHSA have serious concerns that this change will negatively impact student health and safety in Lister.

Drinking will not be discontinued, but will instead be marginalized to regions where the staff has little chance to monitor healthy consumption habits—bars and dorm rooms. If the safety of our students is of paramount concern, this must be addressed.

The impact on acceptable drinking areas in other residences remains unclear at the moment, as the administration has not further defined how shared spaces in HUB, East Campus Village, and Résidence Saint-Jean will be affected.

Myth #5: Students have no say in Lister Hall changes; students and/or LHSA were not consulted.
Fact: It is important to note that the framework for conversations that began in 2008 was created in response to student protest that arose due to lack of consultation. Residence Services signed this framework agreement, even though they did not follow the agreement in creating this proposal.

A week after the administration announced these changes they are still unable to state the emergency nature of health and safety concerns for staff and students. While the LHSA has been a part of discussions about aspects of this proposal, most components have never been discussed with the LHSA and prior discussions did not provide evidence-based practices to the LHSA. It is vital to restate that discussions about implementation of final decisions do not constitute proper consultation regarding the merits of the plan. This proposal has serious repercussions for health, safety, and student engagement at Lister; something that would have been raised had proper consultation been undertaken.

Continually, the University administration has cited the urgency behind this proposal as a reaction to emergent health and safety concerns. However, as can be seen in this graph, calls to emergency telephone lines have experienced a significant decline since 2007. 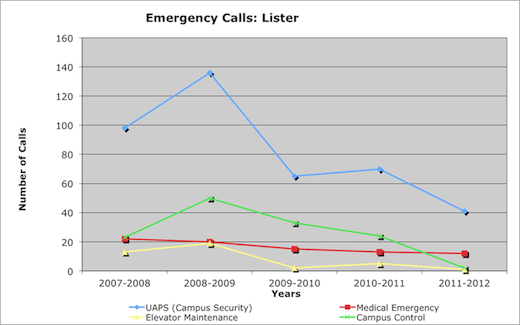