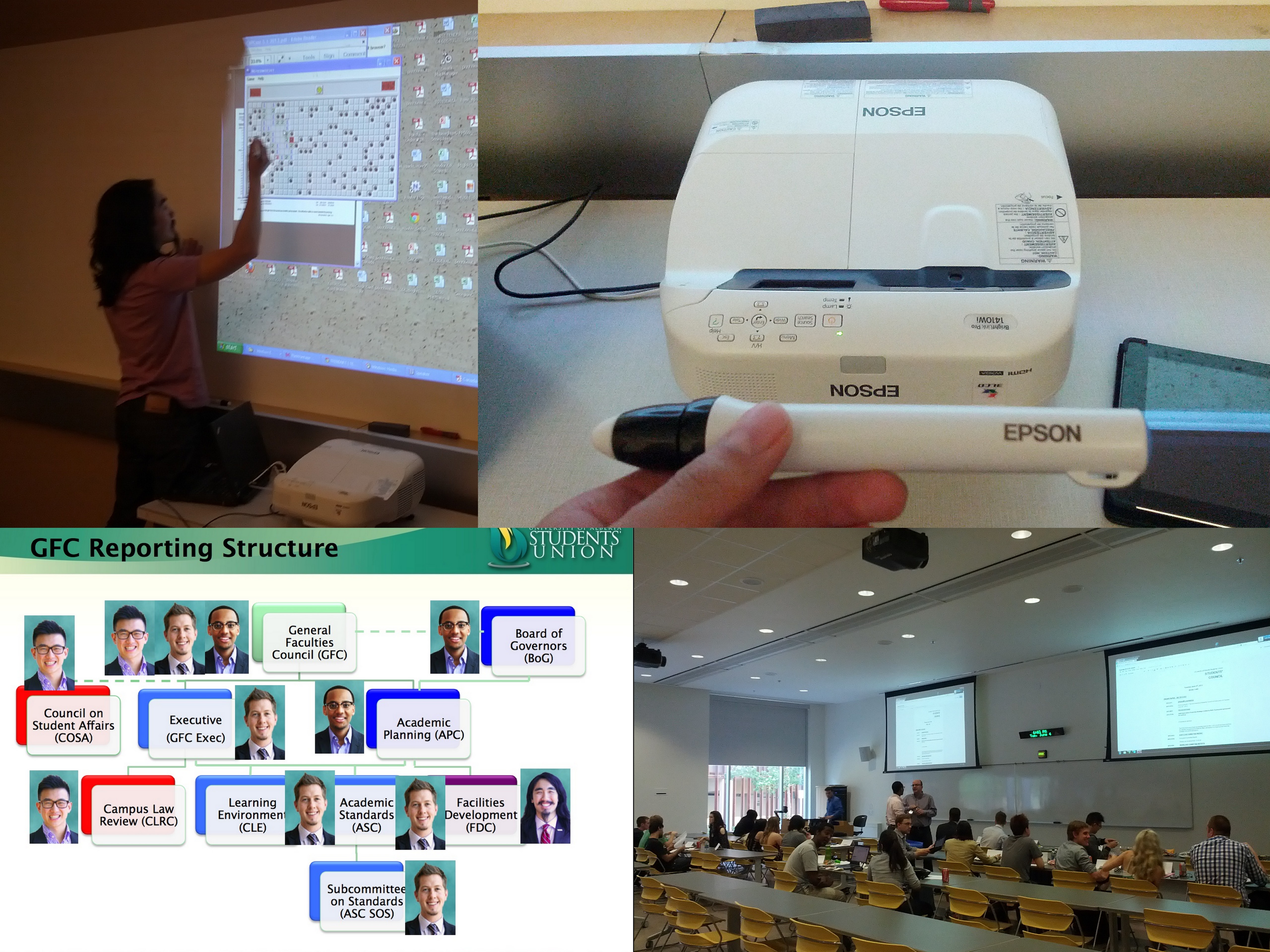 Top: An EPSON and Inland AV rep came in to show off the Epson BrightLink Pro for SUB and some of the new conference rooms. Some notable features: the interactivity is done through an infrared pen so you can project the picture on a regular whiteboard (or any surface) and use it as a smart board, it has an ultra short throw design allowing it to project up to 100" from a 4-6" distance from a wall, and it works without a PC connected to it because it has an internal hard drive in the projector. In short, it was neat. I tested out the sensitivity of the pen on a friendly game of Minesweeper. Unfortunately, the mines won that round.

Bottom-left: We continued our GOV 599 sessions to further understand our governance roles in the scope of the province, University, and SU structures. Here's a snippet of representation of the Exec in GFC, BoG, and its committees. I've counted about ~15 regular committees that the VPOF sit on. I haven't confirmed with the other Execs, but I know Dustin (VP Academic) sits on >40 committees. I have a lot of respect for his committee work demands, the countless meetings, and a wealth of knowledge needed to get the job done well. On top of that, most of his work is behind the scenes. I'll follow up on the other Execs in a future post.

Bottom-right: Students' Council meets every second Tuesday (yes, even through its the summer). Our temporary location is in ECHA 1-490. As previously mentioned, Students' Council is the ultimate authority in the Students' Union. It consists of 40 members ranging from the Speaker, Exec, the GM, and Councillors proportionately representing the undergraduate Faculty population. Together, these individuals are responsible for fulfilling the mandate of the Students' Union. This mandate comes from the Post Secondary Learning Act (Source: su.ualberta.ca/governance/council). It always amazes me how much responsibility each Councillor is given to represent the voice of their Faculty's constituents. That's representative democracy for you.

Other notables: - The Exec Committee is getting into a good groove with our Exec Committee meetings. - Marc Dumouchel gave a solid presentation on the SUB Renovation to Council. - I had a fruitful chat with Justin, our Director of Research and Political Affairs, about using his department for research to accomplish my Exec goals.